He did have the best barrister money could buy in Victoria and he was still convicted. I haven't made up my mind on this one yet.

The jury found him guilty on all charges of orally raping two 13 year old choir boys. Hope he gets what he has got coming in Barwon Prison. https://www.theguardian.com/australia-n ... atest-news
Watch Me!!
Top

The boys in Barwon gonna treat him REAL NIIIIIICE.
Voiceover for hire.
Top

It sometimes confuses me why people have a different tolerance for criminal acts, depending on whether they occur outside or inside a prison.

Tell that to Mokbel.
Voiceover for hire.
Top

I don't think it's a good idea letting crims bash and kill each other. Most of them are released fairly quickly and ideally they won't continue offending.

I think Pell was in his fifties when he committed the offences he was convicted on. If he was a rock spider I'd expect other complainants to now be coming forward about his conduct when he was younger and full of more hormones. The George Pell story might be far from over. I'd be getting more concerned about his conviction if there aren't further credible complainants surfacing.
#IstandwithPaulParker
Top

John Silvester has some concerns over Pell's conviction:

Silvester writes: "In the Pell case, although he had access to hundreds of boys over his career he did not groom the vulnerable. Instead he attacked two he did not know in broad daylight in a near public area.

He could not have known if one of them was not the son of the chief commissioner, the premier or the chief justice who were waiting outside to collect them.

He could not have known if one of them would walk straight out and blow the whistle on him, and with two kids in the room he would have been sunk. This is not the action of a cunning paedophile but of a random, opportunistic criminal who usually turns out to be a serial offender.

Yet no one has alleged Pell had a history of this type of crime."

Personally I don't like Pell nor the Catholic Church but I have significant doubts whether he's guilty.
#IstandwithPaulParker
Top

jackspratt wrote: ↑
February 26, 2019, 6:37 pm
It sometimes confuses me why people have a different tolerance for criminal acts, depending on whether they occur outside or inside a prison.

I've no sympathy for paedophiles, nor do I care about what retribution is served to them, no matter where it takes place.
Watch Me!!
Top

Now we read Pell's clothing makes it difficult for him to have done what was alleged. Doubts seem to be growing.

If Pell is bashed or murdered in prison I think that would bring much shame on the Victorian government.
#IstandwithPaulParker
Top 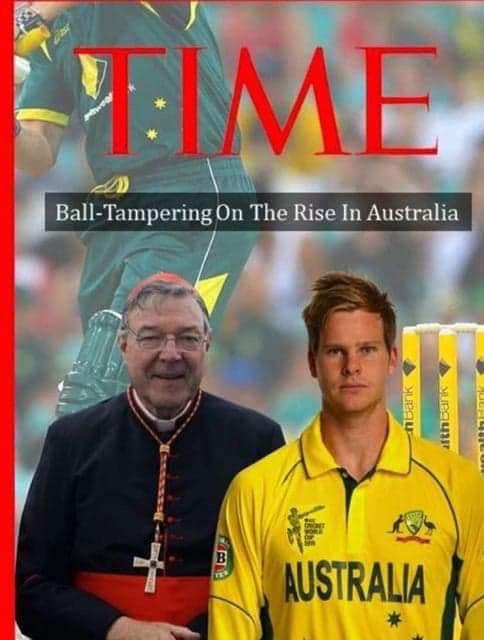 This decision by jury of your peers is being appealed. It has been tainted by media/social media influence and may well change any future trials with likely outcome being the introduction of trial by Judge alone to avoid jury decisions which have been influenced by the sheer weight of social media perception
Top

I think it is about time the brakes came on with a lot of these so called "journalists".
There was an interview last night where a female jurno couldn't wait to "tweet" what a lawyer had to say.
Freely admitted she was stormed with questions outside the court if this report was true.
I always thought the court was isolated from any direct reporting unless a judge gave permission.

Some of the journos probably deserve a bit of a slap.

The verdict, if the appeal is unsuccessful, puts eminent Australians such as John Howard and Tony Abbott in difficult positions.
#IstandwithPaulParker
Top

If this is his only defence he's in a bot of trouble. Richter gets $20,000 a day to act for the prosecution. Strange days....

I think Richter was discussing sentencing rather than Pell's guilt. Presumably lawyers try to bung offences into various categories for sentencing purposes.

I suppose it will be a fairly light sentence given Pell's age and Pell not being a threat to others given his age and health. This case seems to be potentially as divisive as Lindy Chamberlain's.
#IstandwithPaulParker
Top

Some of the journos probably deserve a bit of a slap.

The verdict, if the appeal is unsuccessful, puts eminent Australians such as John Howard and Tony Abbott in difficult positions.

I can't fathom John Howard and Tony Abbott getting involved in this.
Voiceover for hire.
Top

Richter has back-pedaled rather furiously. His statement reflect very poorly on himself, and would have been of little use to his client.

I see one of the grounds of appeal is that the jury's verdict was unreasonable on the evidence presented. That's the bit that concerns me - whether Pell got convicted because the jury didn't like him. He isn't exactly Mr. Popularity.

If the appellate court says the verdict wasn't unreasonable, then I'd be considerably less concerned that an innocent man was convicted. It's not like he was a destitute defendant with inexperienced counsel.
#IstandwithPaulParker
Top

I read a little today on the Ballarat swimmer's case which in the end didn't go to trial. It has similarities to the offences he was found guilty on - indecently grabbing a young male in a public or semi-public place. It would be very surprising if he kept his hands to himself in the decades between these offences. It may be that Pell was a rather nasty young man in his Ballarat days.
#IstandwithPaulParker
Top
Post Reply
79 posts