Seems we're under a curfew from 8pm today until 6am tomorrow.


The Centre for the Resolution of the Emergency Situation (CRES) has announced curfew in Bangkok and nearby cities and provinces in the North and Northeast earlier placed under emergency law.

People in areas under curfew are not allowed to leave their homes from 8pm to 6am, with immediate effect.

State authorities are allowed to perform their duties in the restricted areas to restore peace and order.

The curfew order was signed by Prime Minister Abhisit Vejjajiva late this afternoon.

My wife has had phone reports of red shirts attacking vehicles on the roads. I'm not sure if this is factual or just family trying to convince her to stay at home.

We were in Panama when Noriega was taken out....along with the military and police (his supporters). In a flash, the downtown area was looted to the bare shelf......who did it? Among the poor looking for an opportunity to get a few free 'gifts', there were plenty of Volvos and BMWs lining up at the stores....the drivers walking out with whatever they could carry.

Given the opportunity and lack of enforcement of the law, people will do some awful things.

I wouldn't put be surprised if the same thing happens here.
Top

Here are three pictures taken today in Udon, which I collected over today from different boards. 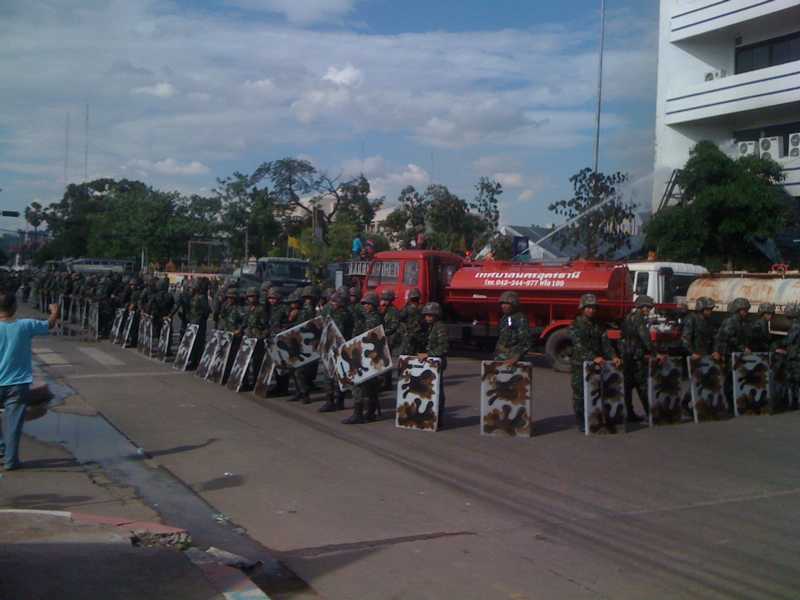 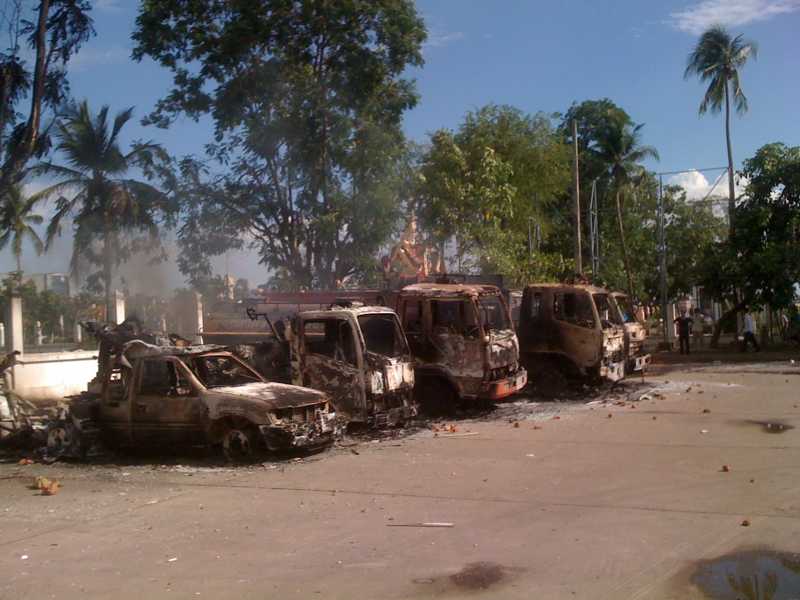 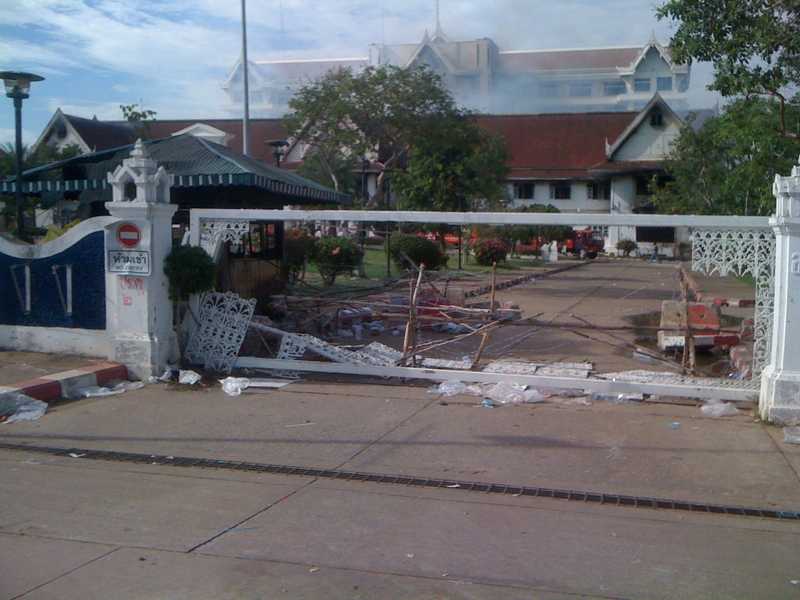 I have just seen this on France 24 news
Top

I think these little thugs masquerading under a "red shirt" banner in BKK have now overstepped the mark.
Setting fire to the Channel 3 TV station where most of the Thai soaps come from, could be a VERY BIG mistake .......... sympathy for them could dwindle very quickly when the Isaan girls can't get their "SOAP FIX" .
Top

I would like to ask any long standing residents of Udon, if this has ever happened before (in Udon) ?
Top

udonuk1 wrote:I would like to ask any long standing residents of Udon, if this has ever happened before (in Udon) ?

10years here and I can categorically say no . Nothing like it . 30 years in Thailand and previous skirmishes were not either. and generally were over in a few days not months like this one .Abhisit will certainly go in the Guinness Book of Records .

21 years Nongkhai and Udon, only last year someone was killed in the small riots then..
Top

I wouldnt like to be staying in the middle of town the way things are now ,im glad im staying 6k outside at the englishmans retreat right next to the army base,and if the reds decide to torch the place its got a pool to jump in

I first arrived in Udon back in 1966 when Thailand was under military dictatorship run by Thanom Kittakachorn. I took a transfer from Udon to U-Tapao Air base in Oct. 1973. We rented a pickup to move our goods to Pattaya, a 30 km commute to U-Tapao, and when we arrived there we found about the student riots that had occurred in Bangkok. 77 deaths on Oct. 14, 1973 alone. Field Marshall Thanom stepped down as PM and military commander and went into exile in the US.

How does it compare? No internet or TV back then. Read about it in the Bangkok Post but not much was said about it after a few weeks. Now? Up to the minute, live coverage by multiple media sources on a round-the-clock basis.
Top

Apparently the curfew has now been extended to Pattaya.

That should be interesting - I wonder if there will be mass discounting on bar fines. Alternatively, scarcity could drive prices higher.

Re: Readers on line .

red67 wrote:I wouldnt like to be staying in the middle of town the way things are now ,im glad im staying 6k outside at the englishmans retreat right next to the army base,and if the reds decide to torch the place its got a pool to jump in

Just around the corner from you red67 and slightly nervy about that army boot camp on our doorstep. Today I stocked up on everything, petrol, drinking water, canned food and whisky, I hope I am over reacting but curfews interfere with supply lines and petrol stations can be shut down in emergencies.

I really do hope this is just a we lost and are throwing a tantrum and will end in the next few days.

I'm amazed how little support the foreigners give the Red shirts, this government is no more than military rule (in Thailand military = elite) If your democratic right was taken from you in your own country, would you not go out on the streets and protest, the only difference is our governments wouldn't bring out the live ammo, plus they would step down in a situation that shows they have lost the support of their nation, Abhisit cannot do this, 1. the elite know they will lose the next GE, 2. The elite will sack him from his post. The elite are so desperate to hold on to government/power, and that is why this country is now in ruins. This country has never had a real democracy bar 2001-2006 and we all know how that ended. Yes Taksin was a thieving, corrupt b@stard, but he was a fairly elected theiving, corrupt b@stard. Now and as prior to 2001 thats all this country had/has was a mock of a democracy, and every government has lined their pockets along the way (do you know 10yrs ago Thais had to have a proper job in order to vote - that was one way of writing-off all of Issarn) It's been this way since the end of absolute Monarchy in 1932.

If these red shirts go home now, you can bet their $hit won't change for another 50yrs. Get real guys and start seeing who the real thugs are in this country
PS - Can you believe this...
http://www.bangkokpost.com/news/local/3 ... uncil-seat
Top

Tai_tan, don't worry about the boot camp, they all left today for the town centre, all tooled up.

Now get this, this intake came in late April, they have had 1 session on the firing range and today they are loaded with live ammo, and they're all 21, if you're staying in the Town keep your heads down guys, these soldiers haven't been trained for this kind of pressure.

My Retreat with it's castle wall and draw bridge is making more and more sense by the day.
Top

Glyn wrote:I'm amazed how little support the foreigners give the Red shirts,

This is not our fight!

Glyn wrote:Tai_tan, don't worry about the boot camp, they all left today for the town centre, all tooled up.


Yeah but!!!! They've got coiled razor wire and oil drums across their entrance gate

I don't expect any of us to fight or even get involved, but I read through these forums and the RSs are constantly being moaned about and called thugs and terrorists, and many sing praises for the governments strong arm tactics. I just want to shine some light on their point-of-view. The government label them terrorists in the international media to justify their actions, so a few came with stick and sling shots, water cannons, tear gas and rubber bullets would have sufficed, now they have up'd the ante and the red shirts are really arming themselves, and you don't negotiate after your leader has been assassinated.

I watched them move them around hours ago